In a piece for the Frankfurter Allgemeine Sonntagszeitung Friederike Haupt investigated the clandestine election campaign aid provided for the AfD party by an organisation called »Verein zur Erhaltung der Rechtsstaatlichkeit und bürgerlichen Freiheiten« (association for the preservation of rule of law and civil liberties). The organisation apparently has connections to the »Foundation for a Europe of Nations and Freedom«.

The organisation finances poster advertising and other advertising material for the German right-wing extremist party AfD and appeared so far during the regional election campaigns in Baden-Württemberg, Rhineland-Palatinate, and now Mecklenburg-Vorpommern. Who exactly is behind the organisation could not be uncovered by Friederike Haupt, they seem to maintain a low profile. The domain of their website was registered under the name of Franconian AfD politician Josef Konrad, who runs a publishing business in Leipzig and issues AfD publications. Perhaps alarmed by Haupts research Konrad was substituted as a contact with Michael Paulwitz, who in turn declined to speak to Mrs. Haupt so far. Paulwitz was until very recently a member of another right-wing extremist party called »Republikaner«, otherwise he performs book readings, for example for the regional »Pro NRW« party, or nurses the German WW2-victimhood myth together with publisher and author Götz Kubitschek (»Deutsche Opfer, fremde Täter«).

A quick IP reverse lookup now yields something interesting: under the same IP-address where the website of above mentioned organisation is hosted one finds under the sub-domain »scanandcheck.fenl.eu« a contact form for the »Foundation for a Europe of Nations and Freedom«. Members of this foundation, which is partly funded by the European Parliament, include Austrian FPÖ politician Barbara Kappel as well as the chairwoman of the French Front National, Marine Le Pen. President is Belgian Vlaams Belang politician Gerolf Annemans, treasurer is Lorenzo Fontana of Italian Lega Nord.

The server is a dedicated server hosted by Hetzner, so it is very unlikely that these two domains ended up being hosted on the same machine by accident. A connection between the two organisations is thus quite obvious. How deep this connection runs, and whether money from the foundation, and hence money provided for partly by the European Union, has been used to support the election campaign of AfD in Germany is a very interesting question.

Clandestine Party Financing: The Europe-Connection of the AfD

In its latest issue (37/2016) German magazine »Der Spiegel« reports on a an event in Berlin featuring a presentation given by former Czech president Václav Klaus. The event was organised by the aforementioned organisation »Verein zur Erhaltung der Rechtsstaatlichkeit und bürgerlichen Freiheiten« (association for the preservation of rule of law and civil liberties). Aside from Klaus, whom Czechs security experts regard as a Kremlin ally (.pdf), also the chairman and founder of Swiss PR agency GOAL AG, Alexander Segert, was present. Segert designs campaigns for Swiss far-right People's Party or SVP.

But it's not only that. He seems to be also very active at the European stage (see infograph below, German only). His agency is likely responsible for the webpages of the »ENF – Europe of Nations and Freedom«, a group within the European Parliament where Europe's right-wing extremist parties, such as the French Front National or Austrian FPÖ, organise. The current boyfriend of German AfD leader Frauke Petry, Markus Pretzell, is also a member.

Segert is also registrant for the Domain »menf.org«. »MENF« stands for »Movement for a Europe of Nations and Freedom«, a European political party integrating Front National, FPÖ, Lega Nord, and Vlaams Belang. The domain forwards to their main website »menleuropa.eu«. Technical contact and hosting provider for the webpages is Swiss company compination GmbH located in Zurich.

Furthermore, Segert's firm looks after the website of the »FENL - Foundation for a Europe of Nations and Freedom«, a political foundation affiliated with ENF group. Articles on the site are written by an author named »goal-fen1-adm1n«. FENL's predecessor the »Foundation for a Europe of Liberties and Democracy« received just under 280.000 € in grants for their work from the European Parliament in 2013. The foundation regularly organises anti-European events, last time in Paris under the topic »Changer le modèle économique imposé par l'Union européenne«. It was for this event the sub-domain »scanandcheck.fenl.eu« was used for.

As noted above both the website of the »Verein zur Erhaltung der Rechtsstaatlichkeit und bürgerlichen Freiheiten« and the sub-domain are to be found on the same server and are thus administered by the compination GmbH. Hence, it seems fair to conclude that the editorial administration lies with Segert's agency GOAL AG.

Given the strong presence of Alexander Segert's company in the European right-wing political landscape the claims of AfD front-runner Pazderski for the upcoming Berlin regional elections vis-à-vis »Der Spiegel« that he had never contact with the GOAL AG, and that he has no idea who is behind the »ominous association« sponsoring AfD- election campaigns, seem to be more than just implausible.

See below infograph that tries to clear up the complexities. 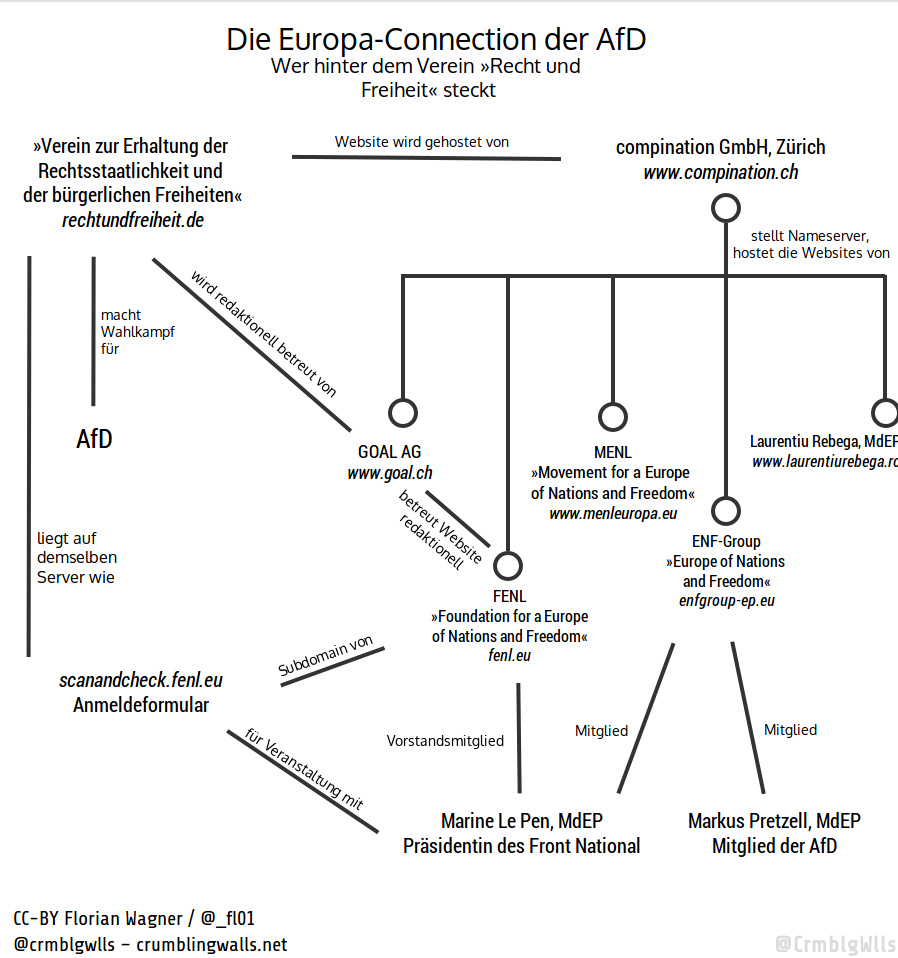 Clarification: Above graphic may suggest that at the event in Paris, for which the sub-domain »scanandcheck.fenl.eu« was used, Marine Le Pen was present as a speaker. That was not the case. Le Pen merely intervened from the floor. Please excuse the inaccuracy.