The recently published report of the Office for the Protection of the Constitution of the federal state of Northrhine-Westfalia (NRW) for the year 2016, one of Germany's 17 domestic intelligence services, describes efforts by the Mullahs to advance their ballistic missile, and thus indirectly their nuclear programme. Contrary to arrangements under the »Iran Deal« they try to obtain technological know-how and high-end industrial goods which are subject to export restrictions. Via front companies, making false statements about recipient, final destination and purpose they try to circumvent these restrictions.

Of most interest are so-called »dual use« goods like highspeed cameras, membrane vacuum pumps or autoclaves. »Dual use« goods are goods that may be used for both, civilian and militarily purposes. For instance, a highspeed camera can be utilised to analyse the behaviour of certain materials in, say, the automobile industry. But it may also help improve rocket engines.

The Offices for the Protection of the Constitution (Landesverfassungsschutzämter, LfV) of the federal states of Bavaria, Hesse, Rhineland-Palatinate, Saxony, Saarland, Thuringia (2014/2015), Brandenburg (2015), Mecklenburg-West Pomerania (2015), and Lower Saxony referred in general terms to the issue of proliferation. They do not mentioned specific Iranian proliferation efforts. The reports from Berlin and Bremen make no mention of proliferation at all.

The Federal Office for the Protection of the Constitution (Bundesamt für Verfassungsschutz) says it registered a decline of Iranian efforts but does not give specific numbers.

Those are delivered by LfV NRW. NRW's counterintelligence discovered 32 cases in 2016 in which Iranians »definitely or with high likelihood« tried to circumvent export restrictions. Although that means that the number of cases is down from its all-time high of 141 cases in 2015 Iran remains the main focus of the service. A majority of goods the Iranians sought were destined for their ballistic missile programme; almost all business contacts fell into the »dual use« category.

Baden-Württemberg identifies an interest in precise manufacturing machinery which is needed for the development of ballistic missile technology. The deal was to be carried out via a third state, which in this case was China.

»A manufacturer of complex metal working machines from Baden-Württemberg received an enquiry from a Chinese import-export business regarding the delivery of a round precision table. Pointing to the need for prior approval by the Federal Office for Economic Affairs and Export Control the manufacturer issued an offer for the desired product and additionally asked for a formal declaration of final destination. Only one day later the Chinese company sent a letter but without naming the final recipient or end user. The company from Baden-Württemberg was then informed by counterintelligence that a transit of the product to Iran was to be expected. Thereupon the company cancelled the order.« (p. 288) 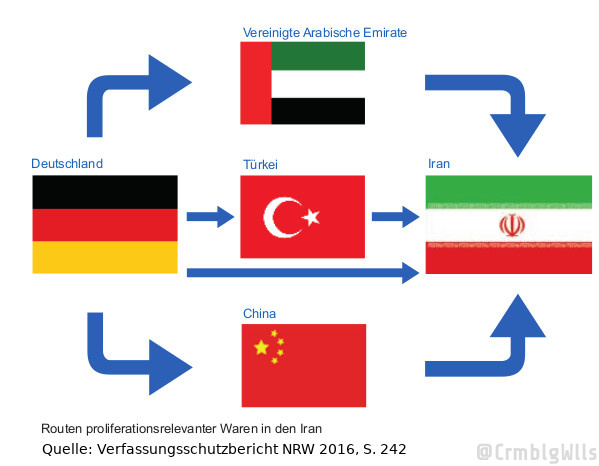 Saxony-Anhalt reports the case of a former company which delivered special valves for the now unusable heavy-water reactor in Arak. The former chairman of said company is now standing trial in Berlin. Furthermore the service says while Iran has stopped working on its nuclear programme the work on its missile programme continues »unabated«. Accordingly the service warns that the Islamic Republic of Iran will be able to »not only threaten Europe« with its medium- and long-range ballisitc missiles (p. 159).

That the ability to project power beyond immediate regional confines is of great interest to the Iranians is illustrated, inter alia, by a quick look at the Iranian constitution. The preambel states that »the constitution prepares the ground for continuing this revolution [note: the Iranian revolution] at home and abroad. Specifically, it strives to expand international relations with other Islamic movements and people in order to pave the way for the formation of a single, universal community [...] to also assure that the continuous struggle for the emancipation of the deprived and oppressed nations of the world is strengthened« (p. 3).

The Hamburg office continues to register attempts by Iran to obtain technology necessary for the country's missile programme. The office states:

»Since previous agreements have not led to a lasting change of Iran's procurement behaviour the Offices for the Protection of the Constitution will continue to closely monitor Iranian activities directed at the acquisition of prloferation-relevant goods.« (p. 215)

The LfV in Schleswig-Holstein only makes general remarks regarding the field of proliferation. Instead the office cites its own activities aimed at prevention through awareness trainings. To that effect they conducted in 2016 in total 17 conversations with leading scientists and companies.