With the so called »Erdogan emails« WikiLeaks wanted to land a coup of their own in the wake of failed Turkey coup attempt. That turned out to be a flop since up to now no mails send by Erdogan or his inner circle were found. Until now no details emerged from the dump that could threaten powerful people in Turkey.

In addition, the former investigative platform shared a link to a database which contains names and addresses, sometimes even mobile phone numbers, of eligible women voters of 79 of the 81 Turkish electoral constituencies, including the information whether the woman is a member of Erdogan's AKP party or not.

Professor and journalist Zeynep Tufekci then rightly pointed out possible consequences for the women, still every year hundreds of women are murdered in Turkey, thousands are hiding from their families, ex-boyfriends or husbands, and confronted WikiLeaks. They in turn reacted very unprofessional and quickly blocked Tufekci on Twitter.

So, that's ... awkward. Do people regularly manage to get blocked by WL, or am I to take this as some kind of sign?

The security expert who gained access to the AKP infrastructure became known as Phineas Fisher, notorious for hacking the malware/surveillance software vendors German-British Gamma Group International and Italian Hacking Team. Fisher wanted to use his access to the AKP net to support the cause of Turkish Kurds, currently under siege in Erdogan's Turkey. But miscommunications lead to WikiLeaks ending up with some of the material liberated by Fisher. Although WikiLeaks was asked to wait with publishing of the material, the coup attempt seemed to be to good a chance for an investigative platform that has no disclosures to offer anymore to pass.

After WikiLeaks pressed forward Fisher decided to release the rest. Analyst Michael Best uploaded the files to archive.org and shared the link via Twitter. WikiLeaks, with its 3.3 million followers not a small account, also shared the link unchecked, thus bringing data sets of more than 20 million Turkish women into global circulation. The archive has been removed by now, and Best apologised for his mistake.

By contrast, WikiLeaks only challenges the allegation they themselves had uploaded the data sets. An apology for disseminating personal information, which are completely irrelevant for the general public has yet to be articulated. On the contrary, the account defends publication of personal data by asserting that »the idea tthat a list of AKP members--Erdogan's ruling party--is a vulnerable group is absurd« (spelling error in original). Apparently the WikiLeaks account user either does not understand the critique or has not read it, or both. Or Assange's attorneys are right when they claim that his mental health is impaired.

Also the idea tthat a list of AKP members--Erdogan's ruling party--is a vulnerable group is absurd.

The same holds true for the so-called DNCLeak. A hacker using the handle »Guccifer 2.0« broke into the servers of the Democratic National Committee (DNC) and stole a large number of documents, including personal data of donors and potential donors which included social security numbers, telephone numbers, and address. A feast for identity thieves. They failed to give an answer to the question of why those information need to be presented to a global audience or to apologise for publishing it, let alone retract the publication altogether.

Behaviour towards journalists such as Zeynep Tufekci does not seem to be an isolated incident. Shortly after that exchange WikiLeaks tried to force Charlie Savage from the New York Times to change the headline of his article. Savage did not cave, but changed the headline nonetheless from: »Assange Timed WikiLeaks Release of Democratic Emails to Harm Hillary Clinton« to »Assange, Avowed Foe of Clinton, Timed Email Release for Democratic Convention«. 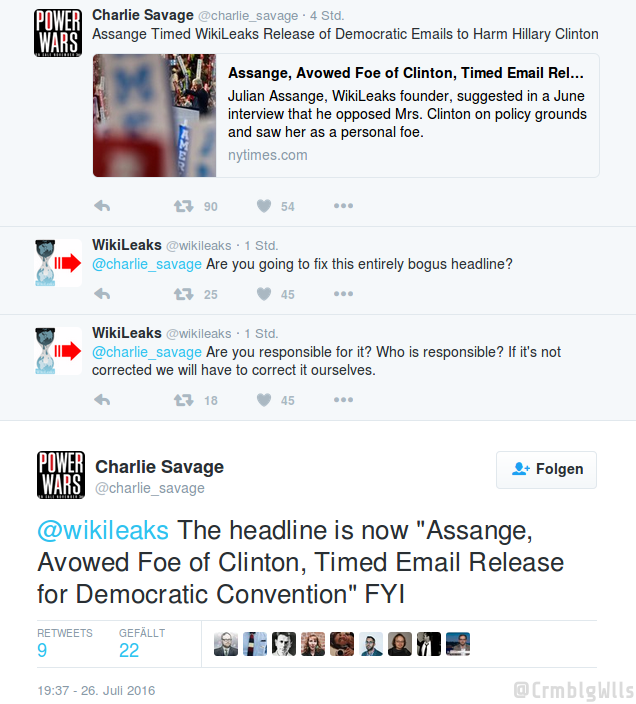 In addition, there are occasional black outs, for example, when the WikiLeaks Twitter account suspects a conspiracy of critics of the platform whose distinctive mark is three brackets around their name and black-rimmed glasses. Apparently unaware of the meaning of those brackets the tweet was swiftly deleted, the anti-semitic tone was just to obvious. 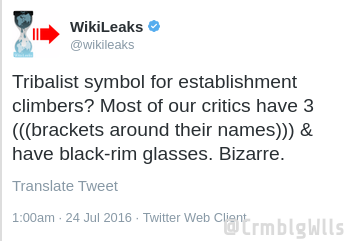 But instead of letting the matter rest the account doubled down in another tweet trying to reframe the appropriation of an anti-semitic gesture as a conspiracy of establishment climbers. Irrespective of the spelling error and the missing of one bracket this smelled badly like damage control while at the same time trying to hold up the initial assertion, that is a conspiracy by the establishment against WikiLeaks. Needless to say that this tweet as well was quickly deleted. 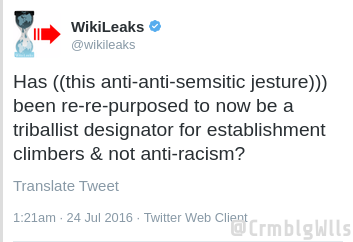 The above mentioned conspiratorial vagaries fit well with a narcissistic personality, like the one displayed by founder Julian Assange, who certainly had enough time to become paranoid during his years of hiding in the Ecuadorian embassy in London. But the simple truth just seems to be that the time of WikiLeaks is over. Bigger leaks and scoops are coming from professional journalists collaborating in investigative networks, who not only dig up explosive material but also evaluate and classify it thereby making it available to a larger public. For someone like Assange that loss of significance must be painful, and leads to black outs such as the one described above.

If he really still is the user of that account. Many of the last tweets are ready-made in an obvious attempt to bring the opinion of WikiLeaks/the Russian Federation of an article by a US-American journalist to a wider audience. Whether Assange himself will tend to this tedious task is rather doubtful.

We have not disclosed whether our sources for #DNCLeak were hackers, employees, consultants, management or ebay.

Likewise WikiLeaks constantly tries to deflect from the fact that Guccifer 2.0, who in the meantime has been identified quite clearly to be Russian intelligence, has already over a month ago clarified that he intends to deliver the yield of the DNC hack to WikiLeaks.

The source of the emails thus is identified. Why then is WikiLeaks still trying to cloud their origin? For a simple reason: WikiLeaks still lives off the nimbus of the fearless »whistleblowing organisation« taking on the mighty of the world. In principal, Assange's personal animosity towards Hillary Clinton, who wants to indict him, does not change that.That WikiLeaks now has been degraded to a mere henchmen of Vladimir Putin's desinformation campaign against the West would destroy that reputation. And in doing so the usefulness of Assange to Putin. The Kremlin boss could withdraw his grace meaning that Assange's days in his hiding place in the Ecuadorian embassy are numbered and he finally would need to answer to the rape charges brought forward against him in Sweden.


This text is the English translation of the German original published July 27.